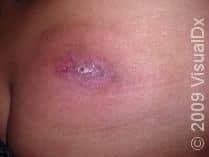 For the Seventh Day of Dermatology, Skinsight has decided to give you interesting information about the skin infection called methicillin-resistant Staphylococcus aureus, commonly abbreviated and referred to as MRSA.

Staphylococcus aureus, frequently called “staph,” is a common bacterium found on the skin and in the nose of approximately 20–30% of healthy individuals. Even though they are said to be “colonized” by these bacteria, such individuals are not considered to be ill with an infection. However, if a staph carrier (or anyone who comes into contact with staph) gets a cut on their skin, the bacteria can cause a skin infection.

MRSA is a strain of staph bacteria that is resistant to penicillin and penicillin-type antibiotics. It causes infections that are similar to ordinary staph but can be harder to treat. Symptoms include a red, swollen, and potentially pus-filled lesion; warmth in the area; and pain radiating from the area. MRSA is spread by direct skin-to-skin contact, sharing personal items like towels and clothing, and touching surfaces that are contaminated with MRSA. The infection occurs most commonly in places such as dormitories, military barracks, day-care centers, and schools. Treatment for the infection includes nonpenicillin and nonpenicillin-type antibiotics and, often, drainage of the pus from the infected area.