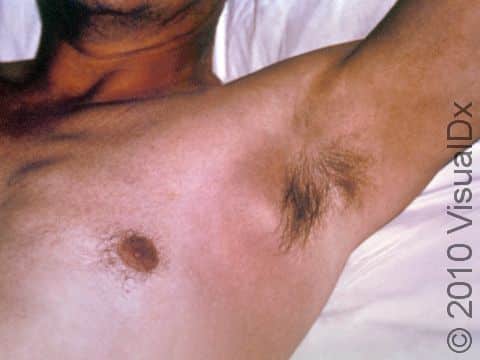 A large, swollen, red lymph node (bubo) in the armpit (axillary) of a person with bubonic plague. Symptoms of the plague are severe and include a general weak and achy feeling, headache, shaking chills, fever, and pain and swelling in affected regional lymph nodes (buboes).

Bubonic plague is an illness caused by the bacterium Yersinia pestis. This bacterium is carried by a certain type of flea, commonly known as a rat flea, which infects humans and animals. Humans can get bubonic plague from the bite of an infected flea, from the bite of an animal infected with Y. pestis, or from handling the carcass of an infected animal. The name of the illness comes from the classic skin lesions that develop in persons infected with Y. pestis: large, swollen lymph nodes called buboes.

Y. pestis has the potential to be used as a weapon of bioterrorism; if this were to happen, the bacterium would likely be dispersed as an aerosol and would cause a different form of plague, known as pneumonic plague. Unlike bubonic plague, pneumonic plague is highly contagious among humans (bubonic plague is not contagious among humans), and mortality is even higher. In the case of a bioterrorism attack with Y. pestis, the United States maintains a stockpile of appropriate antibiotics to treat plague.

Bubonic plague is usually passed to humans from the bite of an infected rat flea, which almost always infests rats, though other small rodents and even some domestic animals, such as cats and dogs, have been infected. In the United States, rat fleas are found in the Southwestern states. Other countries around the world with rat fleas and bubonic plague include India, Vietnam, parts of Africa, and the former Soviet Union. People at risk for acquiring bubonic plague include:

The typical symptoms of bubonic plague infection are large, swollen, tender lymph nodes called buboes. These usually occur in the neck, armpit, and groin. Other symptoms include:

Bubonic plague can evolve into septicemic or pneumonic plague; these people will look even sicker, with symptoms of weakness, confusion, abdominal pain, cough, chest pain, and presence of blood-tinged sputum.

Bubonic plague is an unusual diagnosis and needs to be treated quickly, so if you have reason to suspect that you have bubonic plague, you should seek medical attention immediately and relay your concerns. Additionally:

There is no vaccine for bubonic plague.