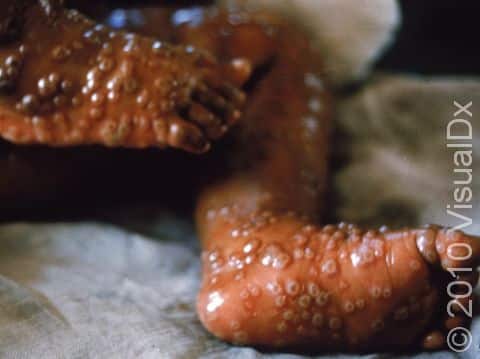 Smallpox was globally eradicated in the 1970s. Any case of smallpox means a bioterrorism event. Blisters (vesicles) develop all at the same stage, in contrast to chickenpox, where lesions are in different forms at the same time. 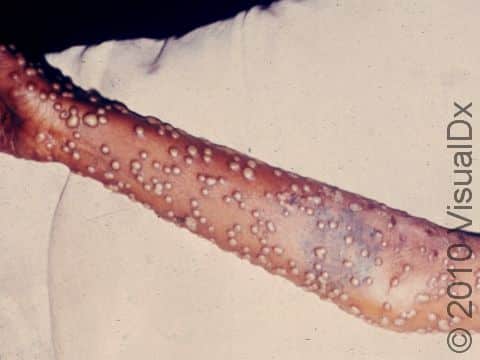 Smallpox is a disease caused by the variola virus, a virus that is carried and transmitted only in humans. Through a careful program of vaccination, the variola virus is now completely eradicated. The only variola virus known to exist is stored in two labs: one in Atlanta and one in Moscow.

Smallpox is a highly contagious and potentially fatal disease spread by human contact. It is usually spread by face-to-face contact with an infected person or by contact with the secretions from a patient’s rash. There is no certain treatment for smallpox, and the best prevention is immediate vaccination after exposure.

Smallpox is fatal in 30% of cases.

The signs and symptoms of smallpox gradually emerge and may be difficult to distinguish from other diseases in the early phases. After exposure, a person usually has no symptoms for up to 17 days; this is the time when it is most important to get vaccinated to prevent disease. The affected person is not contagious at this time.

The next phase is called the prodrome; this lasts for 2–4 days, and the symptoms resemble that of many other illnesses, with fever, achiness (malaise), headache, and vomiting. The person is contagious at this time.

During the next phase, the characteristic rash begins. First, small red spots appear in the mouth and throat. These spots are filled with clear liquid that is very contagious. The rash spreads to the rest of the body, focusing on the hands, feet, arms, and legs. The rash looks like red bumps that gradually fill with a milky fluid. The fluid-filled bumps are all in the same stage at the same time, compared to chickenpox, where the skin blisters are in different stages of appearance with a mix of blisters, bumps, and crusted lesions at a given time.

In the following phases, over the course of about 2 weeks, the bumps eventually dry up, scab over, and heal, leaving a small pitted scar. The person is contagious until all the scabs are healed.

If you suspect you have been exposed to smallpox, call your doctor. If you are diagnosed with smallpox, follow your doctor’s instructions. Keep lesions clean and covered, and do not pick off scabs.

If you are exposed to smallpox, you should immediately be quarantined and vaccinated. Vaccination is not done routinely, but in the case of an outbreak or a bioterrorism attack, the US government has a stockpile of smallpox vaccine sufficient to treat the entire US. There is no definitive treatment for smallpox; vaccinia immune globulin (VIG) and cidofovir, an antiviral medication, are the first and second treatments you will likely receive. In addition, your doctor will make sure you are hydrated with IV fluids, have adequate pain control, and have appropriate antibiotics in case your rash becomes infected with bacteria.

If you have been exposed to smallpox or think you have smallpox, you should immediately call your doctor to discuss your care. Your doctor will recommend that you remain quarantined (stay at home without contact with any other people) and will help you arrange vaccination and treatment.