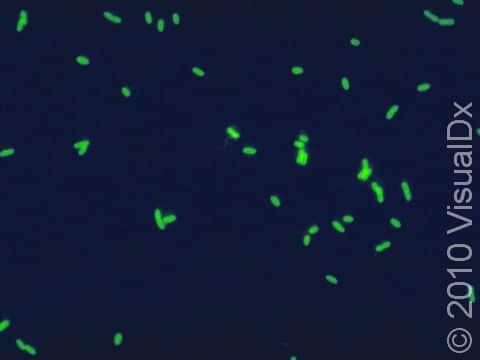 The Legionella pneumophila bacteria are tagged with a monoclonal antibody treated with a fluorescein dye. After binding to the bacteria the slide is viewed under ultraviolet light, and the bacterial cell walls glow green. 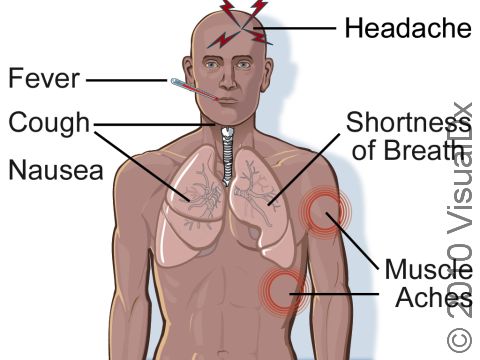 The early symptoms of avian influenza are remarkably similar to influenza (the "flu"). 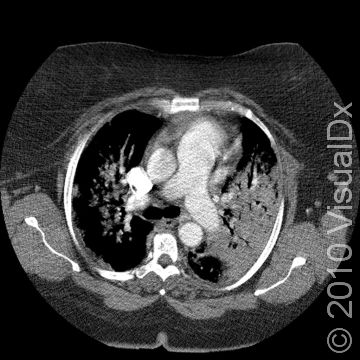 CT scan of chest showing consolidation of the left upper lobe (right side of image) from Legionnaire's disease. 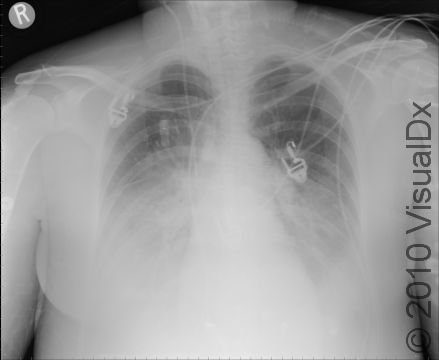 Legionellosis is the name for infection caused by the Legionella pneumophila bacterium. Infection can take two forms: the more serious legionnaires’ disease, which is a pneumonia, and the less serious Pontiac fever. The L. pneumophila bacterium got its name from an outbreak at a convention of the American Legion in 1976, when many people staying in the same hotel developed an unusual pneumonia. L. pneumophila is found naturally in water and is often found in the water systems of large buildings, such as the heating and cooling elements of hotels and hospitals.

Legionellosis is transmitted by inhaling water droplets that are contaminated with L. pneumophila. There is no spread of legionellosis by person-to-person contact. Examples of sources of contaminated water sources include air conditioning units (usually those servicing very large buildings, not small window units) or steam from a sauna or whirlpool.

Because the infection is somewhat difficult to diagnose, and because common treatments for other respiratory infections will successfully treat legionellosis (even without a diagnosis ever being made), many cases of legionellosis probably go unrecognized. Usually, it is not a serious infection, though in patients who are already ill or who are at risk, mortality may be 30%.

Anyone who is exposed to L. pneumophila is at risk for developing legionellosis. However, healthy children and adults rarely develop a symptomatic infection. People at specific risk include:

Healthy people usually recover quickly from legionellosis with appropriate treatment; it may fatal 30% of the time, however, and those who die usually have some of the risk factors listed above.

Signs and symptoms of legionellosis usually develop within 14 days of exposure to the bacterium. The symptoms are not very different from many other illnesses, so legionellosis can be difficult to diagnose. The symptoms usually last for less than a week and get better within 5 days.

Symptoms of legionellosis include:

Until you can see a doctor, be sure to rest and stay well hydrated. Caretakers and household members should note that legionellosis is not contagious from person to person.

In order to diagnose legionellosis, your doctor will need to perform specific tests on your sputum (the material that you cough up) and your urine to confirm the presence of the bacterium. The doctor may order a chest X-ray to confirm the diagnosis of pneumonia. There is no definitive blood test for legionellosis. Common antibiotics are used to treat legionellosis.

Always see a doctor when you have fever and cough, particularly if you have any of the risk factors listed above.